Ammonia is energy as it's never been known before.

We envision fitting into the high-voltage transmission grid as a sort of ‘kitchen sink’ for all surplus renewable energy. The energy storage capacity of Ammonia fuel is only really limited by the supply of electricity, meaning we can purchase every single kilowatt-hour of surplus renewable generation in an entire ISO (Independent System Operator, or regional electric grid) for storage as our liquid sunshine. 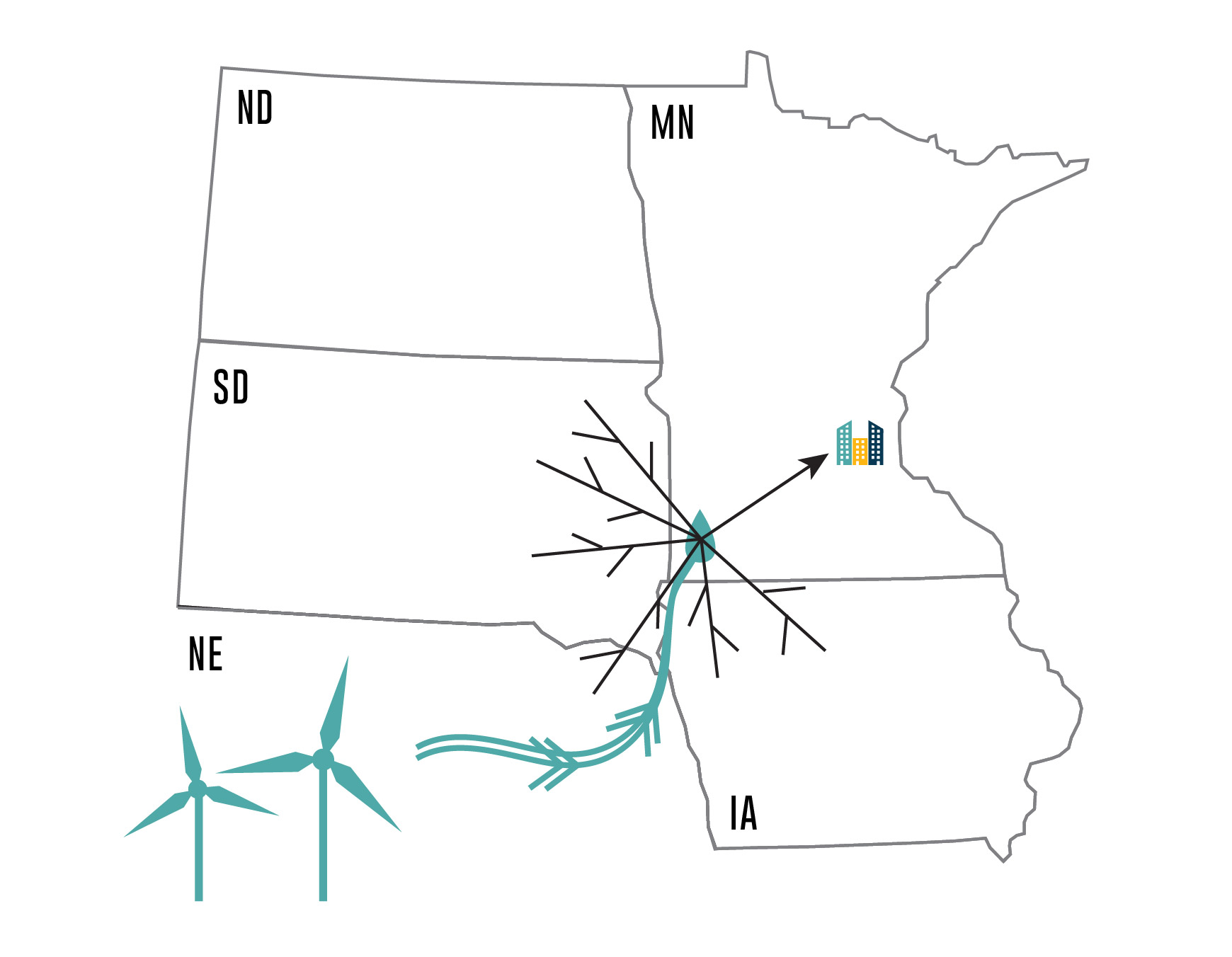 Right now, when the sun is high in the sky and solar panels are overproducing, or when the wind is out flipping shingles at 02:00 in the morning and turbines are spinning maniacally - there are too many kilowatt-hours generated without a guaranteed offtaker, which can damage grid infrastructure and even start wildfires. The modern solution is to simply disconnect the overproducing units from the larger grid, called 'curtailment'.

Our Ammonia/Hydrogen fuel will permanently eliminate curtailment by providing a guaranteed purchase of every kWh of renewable power, establishing regional power price floors which will facilitate an unrestricted buildup of renewable power everywhere. Developing our technology will guarantee that the surplus power is efficiently captured, and in a form that can safely power everything from refrigerators, to industrial furnaces, commercial airliners, and even space-faring rocket ships.

Carbon-free fuels are our future.

Pure Hydrogen (H2) would be the best alternative to fossil fuels because it can provide the same energy as fossil fuels without any polluting emissions. Unfortunately, it does not currently have any noteworthy trade infrastructure in place because it is extremely explosive as a gas, and so must be transported as a cryogenic liquid at extremely cold temperatures – which is hugely expensive and generally impracticable.

In direct contrast, Ammonia (NH3) contains a higher density of Hydrogen than even pure liquid Hydrogen, and is currently safely transported in liquid form under modest temperatures and pressures via both pipelines and tanker trucks. Further, Ammonia can be stored for long periods (up to years at a time) without any energy degradation. After arriving at its final destination anywhere in the world, Ammonia can be “cracked” to release the high-purity Hydrogen stored within for on-demand use as a carbon-free fuel at any time, in any place, for any application.

We need a carbon-free alternative to fossil fuels that can provide stable, reliable power in all regions at all hours of every day, filling in the gaps that wind and solar simply cannot bridge alone. Battery storage can alleviate some of the intermittency of renewable energies, but no storage technology on the market today can economically meet the large capacity requirements of carbon-free, grid-scale storage.

Additionally, solar and wind power are generally most abundant in regions that are physically distant from where the power is consumed; significant and sustained investment in power grid reinforcement and expansion would be necessary to accommodate such long-distance transmission of these stranded, variable resources from rural areas to urban and industrial centers.

By producing Ammonia from surplus renewable electricity in these rural areas – a liquid fuel that can be sent down the network of pipelines that already exists – we can completely bypass major capital barriers to renewable energy development. Our reactors can be strategically situated to minimize transmission and distribution costs, and maximize the cost-efficient transfer of renewable energy from rural areas of generation to urban areas of consumption. Further, this approach removes the growing need to electrify all processes, as these renewable resources will arrive at their destination in the form of a liquid fuel that can simply be ‘cracked’ and burned to generate heat for industrial processes and other applications. As well as using fuel cells to efficiently convert the Ammonia back to electricity, this means that our single fuel can safely power every energy-requiring activity on Earth – something no other renewable technology can boast.

Our approach minimizes the process changes that are required for total global decarbonization, and solves the biggest problems facing intermittent renewable energy. Ammonia will finally enable a clean and sustainable Hydrogen-based economy worldwide. 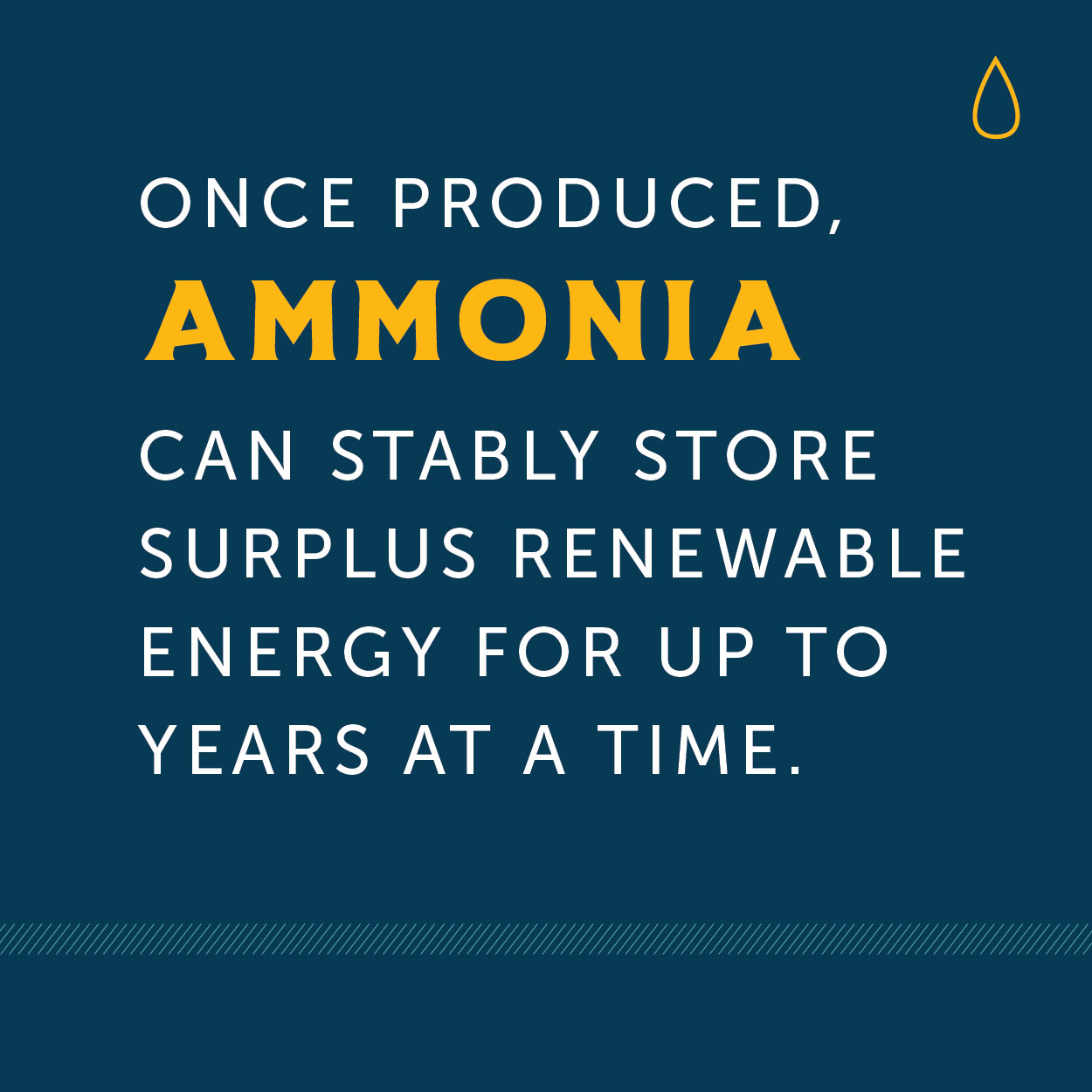 Ammonia is a stable vector for sustainable, carbon-free energy to power our society without lasting ecological damage.

While Ammonia is already a heavily traded commodity, the Ammonia used today is produced by an expensive and energy intensive process – the Haber-Bosch Process, which consumes large amounts of fossil fuels and accounts for up to 2 percent of the world’s current greenhouse gas emissions. Our novel electrocatalytic process will synthesize Ammonia from ambient air, water, and renewable electricity, and release exactly zero GHG emissions. It can also synthesize Ammonia from partially-treated waste water, which is a highly-efficient market entry point to initiate the adoption curve of Ammonia fuel by providing a reliable supply, and to generate an initial revenue stream to support the organic scaling up of our commercial operations.

Our liquid sunshine will be produced much more efficiently than traditional methods; additionally, it will be produced much closer to areas of intense wind or sunshine rather than only where a very expensive refinery is constructed. This means that the price of Ammonia will not only undercut market prices for fossil-sourced ‘brown’ Ammonia, but that it will compete directly with traditional fossil fuels, without subsidy.

Compare this to Lithium-ion storage for example, which functions best over just a few hours, or days at the most. Whenever this stored energy is needed, our Ammonia can be converted on-demand using established fuel-cell technology to provide pollution-free energy to electric grids, automobiles, maritime shipping, air travel, and anything else that currently relies on fossil energy. Our liquid sunshine is a safe and cost-effective commodity that will finally enable the global, emissions-free Hydrogen economy that has been pursued for so long.